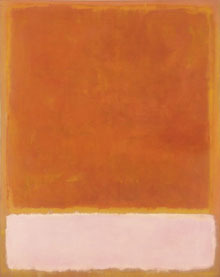 Art Basel 2012: the future’s orange
Colin Gleadell previews the world’s biggest and most prestigious fair for modern and contemporary art.
A who’s who of collectors, museum curators, artists and critics has arrived in Switzerland for Art Basel, the world’s biggest and most prestigious fair for modern and contemporary art, which runs throughout the week.
It’s a demanding course, with more than 300 galleries from North and South America, Europe, Asia and Africa in the main fair to check out, and as many again in various ancillary fairs. The art ranges from blue-chip post-war masters worth tens of millions of pounds to the latest discoveries who have yet to hit the auctions. And then there’s the non-stop merry-go-round of dinners, open discussions and debates. From the menu this year, I would recommend listening to John McEnroe’s art adviser, Josh Baer, talking with the Los Angeles Museum of Contemporary Art’s market-savvy director, Jeffrey Deitch; Indonesian billionaire collector Budi Tek on building private museums in Asia (he has two); and the advisor to the big-spending Qatar Museums Authority, Roger Mandle.